A long lineage of cultural critics, from Guy Debord to Carl Roscoe, have insisted on the unique ability of contemporary societies to ‘merchandise dissent’. Also, one man’s foe is another man’s icon. So, after  Saddam Hussein’s card decks and the Osama Bin Laden Russian dolls, US new public enemy n. 1, WikiLeaks, spawns a series of novelty products. Here’s my – so to speak – favourites. 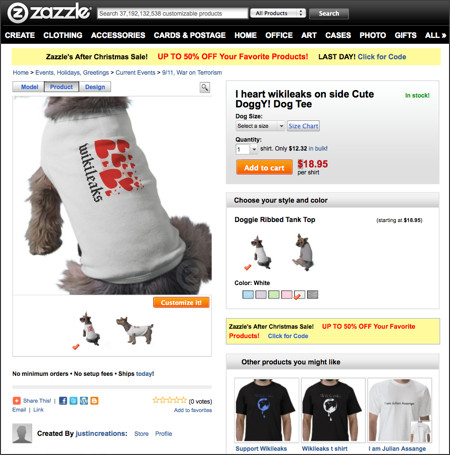 Let’s say you have a small yappy dog. Which is admittedly already pretty annoying. What would you do to make it into an even more annoying little animal? Well buy a “I heart heart heart WikiLeaks” dog tee-shirt. Please note the Gothic font, which automatically adds a biker tattoo twist to the whole thing.

Apart from the obvious irony of having a condom with the word “leak” in its trademark, this is just one of several birth control devices ispired by Julian Assange’s sexual antics. This one is known to be produced by Toulouse-based hackerspace Tetalab, and distributed during the 27th Chaos Communication Congress (Berlin). This is, on the one side, the most disturbing item (the very idea of a “leaky pizza” is quite upsetting…) but also  one that clearly takes a militant stance over Assange’s enteprise. Customers are invited to mail their own recipes. The most outrageous topping wins 1000 €, plus the same amount of money is donated to the Wau Holland Foundation to support WikiLeaks.