The French translation of this essay is available on OWNI, as the first installment of my column Addicted To Bad Ideas.

While studying urban violence, I bumped into data artist and TED fellow Salvatore Iaconesi (aka xDxD.vs.xDxD), who was working on some impressive riots visualizations. A couple of weeks ago, he published a video on his website bearing quite upsetting news…

Despite my initial disbelief, that was not a hoax, nor a situationist artwork. Admitted to San Camillo Hospital in Rome and diagnosed with a brain cancer located in his frontal lobe, Iaconesi was facing limited therapeutic options (surgery, chemo or radiotherapy) and a poor prognosis (gliomas are almost never curable).

Determined to look for further advice, he grabbed his medical records and headed back home. Where he discovered his MRI and scans were in proprietary format… Luckily the self styled “software pirate artist” and creator of the collective Art is Open Source, had a couple of hacker tricks up his sleeve. He cracked the files, put them online, invited feedback from medical experts and laypersons. In a couple of days he started receiving everything from get well emails, to scientific literature references, to health professionals contact information, to tips for cutting-edge therapies. Of course, it was a mixed bag. So he decided to map, sort out and analyze these disparate contributions by means of a data visualization tool of his own design. The scrollwheel he now updates daily on his website is a navigable graph providing access to medical records and relevant information delivered by the online community rallied around his “open source cure”. 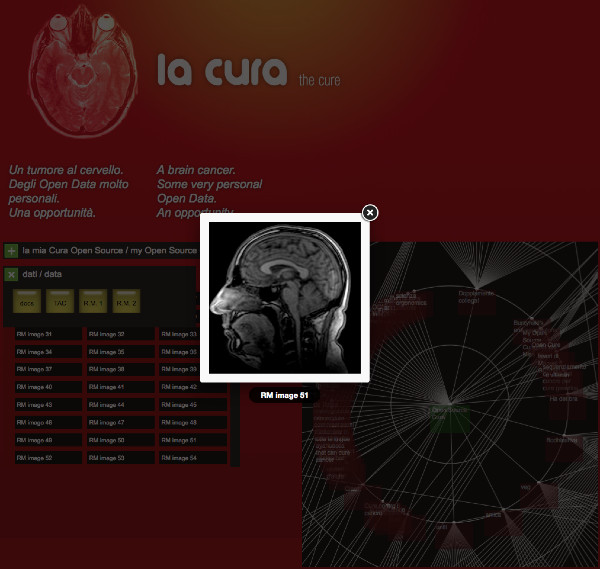 Open cure and the Medicine 2.0 Zeigeist

The cultural significance of Iaconesi’s case is manifold. The most straightf orward way to address it would be to focus on the privacy implications of his online quest for an open cure for cancer. Is the sharing of medical records and the crowdsourcing of a treatment indicative of a shift in our relationship to the personal dimension of illness? Although the artist’s decision to “go open” about his condition is perhaps appealing for the press running the usual media circus around him, this question is far from original. Prominent cancer survivors (the likes of Jeff Jarvis or Howard Rheingold) have long argued that there’s a curative potential in Internet “publicness”. The creation of networks of people providing emotional support and sharing experiences as well as medical advice is hardly a novelty. This resonates with the experience of millions of cancer bloggers and discussion forum members, documenting their lives and daily struggles online.

The originality of Iaconesi’s Open Cure lies elsewhere, namely in the way it problematizes the notion of openness by mixing medical humanities, hacking and grassroot e-health. Let me put it in plain words. Actually, when the artist complains that his medical records are “not open” he is technically inaccurate. The DICOM (Digital Imaging and COmmunications in Medicine) standard used to store his MRI scans and tomographies is, in theory, open as far as it achieves nearly universal interoperability across medical IT equipments. Nevertheless, in a recent interview Iaconesi maintains that

even if “technically open”, the format in which my medical records have been disclosed is not enough, because it is “open for professionals” and so the only thing I could do with it would be “show it to professionals”, missing out on all the other wonderful parts of the “cure” which are available in the world.

What is at stake in his distinctive characterization of openness – of patients’ data, of electronic medical records technical standards, and ultimately of the cure itself – is the relationship between health professionals and patients. The accessibility of online health resources has been saluted as an invaluable tool for patients’ empowerment and has dramatically reshaped medical professions in the last decade. Researchers have witnessed the rise of “medical disintermediation”, i.e. the progressive demise of health care professionals as intermediaries between patients and their medical information. Some have gone as far as to announce the coming of a “peer-to-peer” approach to health care.

In this sense, today’s open cure is part of a Medicine 2.0 zeitgeist that glorifies the role of connected patients by entitling them to access, manipulate and share their own medical records – see recent high profile events such as the U.S. Department of Health-sponsored Datapalooza.

However, this does not mean that laypersons’ voices and opinions crowd out health professionals expertise. The question of credibility and reliability of medical information is crucial. As Oxford Internet Institute researcher Ulrike Rauer points out, when it comes to Internet-based health records, patients still trust medical professionals more than private and corporate operators. Even the most enthusiastic supporters of Medicine 2.0 do not hurriedly yield ground to disintermediation. On the contrary, they admit that health professionals and patients are part of a complex ecosystem of online “apomediaries”. As Gunther Eysenbach puts it

The difference between an intermediary and an apomediary is that an intermediary stands “in between” (latin: inter- means “in between”) the consumer and information, meaning that he is a necessary mediating agent to receive the information in the first place. As a result, the credibility and quality of the intermediary heavily determines the credibility and quality of the information a consumer receives. In contrast, apomediation means that there are agents (people, tools) which “stand by” (latin: apo- means separate, detached, away from) to guide a consumer to high quality information and services without being a prerequisite to obtain that information or service in the first place, and with limited individual power to alter or select the information that is being brokered. While these distinctions are not absolute (in practice, there may be a mix of both and people move back and forth between apomediation and intermediation models), it has been hypothesized that they influence how people judge credibility.

Another important aspect of Iaconesi’s open cure is the way it advocates for a humane approach to health and illness. His project aims to translate data into some sort of hybrid natural language, comprehensible by laypersons and by medical equipment operators alike.

The first thing you notice at the hospital is that they are not really talking to you. Medical language is difficult and complex, and they rarely take action to make things more understandable to you. One of the testimonies I received in La Cura was that of a lady who has found herself in front of a doctor shouting at her: “You really think that I will explain to you why your thyroid has to be removed? It has to be removed! That’s it!”
This is really not “open”, in any sense. And, in more than one way, it is an explicit evidence of the approach which medicine has towards patients: they cease to be “humans” and become sets of parameters on a medical record subject to certain protocols and standards. When you are in the hospital, it’s often as if you’re not there. The only thing that matters is your data: blood pressure, heartbeat, magnetic resonance etc.

Opening medical data equates to reconciling medical knowledge and the bodily experience of illness. And in this specific respect the inspiration for the Italian artist’s “cure” can be traced back to the growing interest in medical humanities. Since the late 1950s, a body of works of literature, art, and scholarly productions in medical anthropology and social sciences dealing with the experience of illness is used in medical education and practice. Beyond basic bedside manners, medical professionals are increasingly trained to develop skills of humane medical care, observation and empathy with their patients. This is obtained by examining first person accounts of patients or by studying the sociological and cultural context of the practice of biomedicine. Even without venturing into the most creative, and sometimes controversial, field of art therapy, this new domain clearly has the potential of complexifying and improving the present understanding of well-being and of its many opposites.

Iaconesi has invited not only medical experts and fellow patients, but also poets, visual artists, and musicians to take part in his online experiment, and this clearly situates his open cure at the crossroad of medical and digital humanities. So far, this liaison between computer science, humanities and medicine has been mainly ensured by medical professionals with some background in informatics, like the initiators of the Medical Future Labs and of related programmes around the world. The fact that an artist – and, moreover, a person living with cancer – has now launched a similar initiative surely promises invaluable insight into the way illness and healing are experienced in a computer-mediated social environment.

Think about the possible evolutions of the notion of “disease” and “health” applied to our current situation, the possibility of reverting to forms of dignity and human sociability based on the sharing of ideas and experiences, on the reappropriation of a state of sincere and active solidarity, comprehensive and manifold.