A French summary of this post has been featured in Slate.

If you orbitate around the anglophone Twittersphere, you have noticed the hashtag #hasJustineLandedYet pop up online in the night of Dec. 20, 2013.  If you don’t, you sure have not escaped this story in the mainstream media: 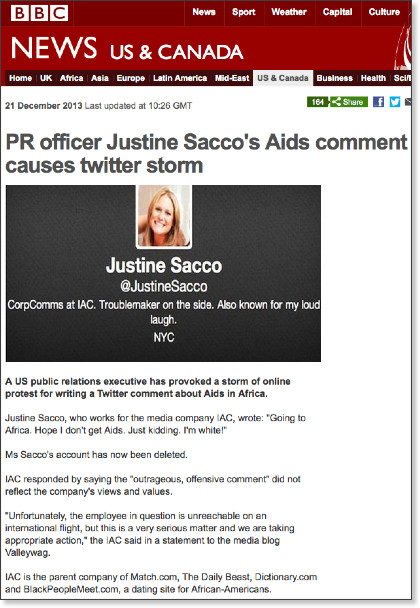 The tweet that started all this (since then deleted, along with Sacco’s account) read: “Going to Africa. Hope I don’t get AIDS. Just kidding. I’m white!”.

Agreed, it is horribly racist and totally insensitive towards people living with HIV/AIDS. Plus, it is a total ripoff of Jimmy Carr’s comedic routine.

The Twitter outrage that followed this message is understandable. From a sociological point of view, the uproar functions as a sanction mechanism. It indicates that the online community has engaged in a process of self-regulation and collective negotiation of norms and standards of behaviour. More than one century ago Emile Durkheim advanced a similar explanation for deviance 1: the social body reacts to violation of rules by reiteratively drawing the line between acceptable and unacceptable acts and utterances—thus “protecting itself against the withering away of the collective conscience.” 2

A lot could be said about the excessive sense of virtue underlying our online collective conscience. For this, I draw upon The Online State of Nature, a thoughtful essay penned by Christian writer and humanities professor Alan Jacobs. According to Jacobs, we measure ourselves and our online achievements in terms of one specific virtue: justice.

We live in a society with a hypertrophied sense of justice and an atrophied sense of humility and charity, to put the matter in terms of the classic virtues…. And so, as we have come to focus our attention ever more on politics and the arts of public justice, we have increasingly defined our private, familial, and communal lives in similar terms.

We are driven to online participation because “someone is wrong on the Internet”, to tell it like the classic xkcd cartoon, and by the will to prove that we are right. A moral and semantic shift arises when being right stops meaning that we contribute accurate information to online social platforms, and starts signifying the inherent righteousness of our contribution. There is no denying that the members of that same justice-hungry lynch mob that today is rising up against hate speech are not, statistically speaking, immune from racist and HIV/AIDS stigmatizing remarks. For them, the entire Justine Sacco affair can be regarded as a way to reassert some sort of moral upper hand over a random villain.

Well, not completely random in fact. As an Internet company PR executive, Sacco is first and foremost perceived as a professional making a living by selling corporate virtue. Her (former?) employer IAC owns a number of companies that thrive on values such as conjugality (Match.com, Meetic, OKCupid),  equality (BlackPeopleMeet.com), filial piety (OurTime.com, SeniorPeopleMeet.com)…

So what this story really boils down to is the “expectation of virtue” we place upon online communication professionals. It’s Google’s “don’t be evil” effect: today’s Internet companies act as moral entrepreneurs. They set the moral standards for themselves and for the entire industry. And then, as philosopher Ian Bogost recently pointed out, they continuosly redefine those very standards when they miserably fail to live by them.

For too long Internet companies have banked on the peace-love-and-understanding heritage of 1990s utopian cyberculture 3. For too long their main marketing trick has been to display how virtuous and benevolent they are in comparison with their non-Internet counterparts. But, over the last couple of years the mask has come off. Prominent Internet companies have turned out to be just about as polluting, labor-exploiting, tax-avoiding, surveillance-states-collaborating, sex-and-race-discriminating as any other capitalist enterprise. So why act so surprised when their employee’s online “jokes” turn out to be morally questionable?

By way of conclusion, I’d like to invite you to read Matthew Fuller and Andrew Goffey’s book Evil Media 4. The point the authors make is that, if we want to understand contemporary online media, we have to recognize the “cartoon simplicity” of its moral discourse, which aspires to friction-free transparency and neutralizes all “deviant and devious propensities” (even those, like Sacco’s tweet, coming from its inside). The hypothesis that media may actually and systemically be evil is to be explored in an “extramoral sense”, warn the authors: not to denounce the inner corruption of contemporary communication intermediaries (thus falling in the good/bad dualistic simplicity they circulate), but to look through the ideological distortion and recognize the moral grayness and opacity that they contribute to create.

Forming the object of countless forms of denunciation, media are frequently absolved and divested of any specific active qualities of their own by means of broad concepts such as that of “instrumental rationality” or visions of preconfigured social agents to whose service such means are harnessed (class domination, liberal elites, vested interests). Viewing media as transparent to human intentions—albeit intentions that are often distorted or misrecognized through ideology—is a conception of mediators as intermediaries, which is built on a moral presupposition the construction of which it is unable to understand or sense its own active contribution to. In this context, the phrase “evil media” makes this troubling but often unacknowledged opacity palpable, situating at the heart of processes whose transparency is typically presumed an opacity that usually only surfaces when things go wrong.