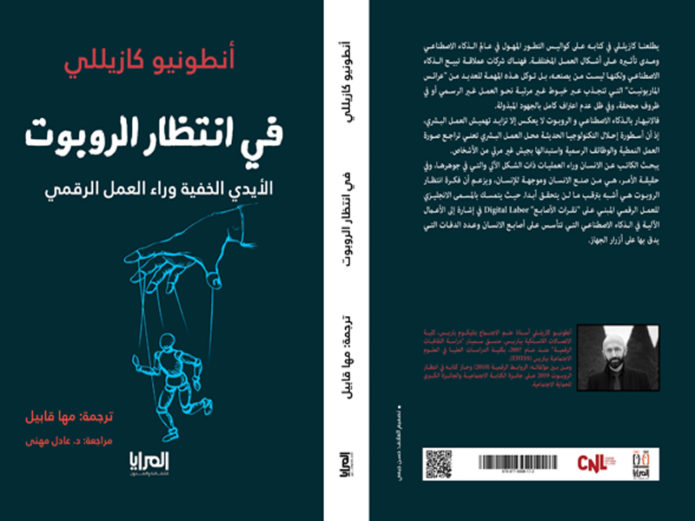 After the Italian and the Spanish translations of my latest book [Waiting for Robots. An Inquiry Into Digital Labor] En attendant les robots. Enquête sur le travail du clic, here is the Arabic version, published by Dar Almaraya, Cairo, Egypt.

The production of value online is always collective

My research is situated in a wider field than the simple automation of productive labour. The most controversial question, which is generating a lot of discussion about digital labour, is the return of implicit work, of invisible work. It is often boiled down to this question: is posting on Facebook working? But this is really a quite cursory way of phrasing the issue which makes me uncomfortable, even though I know journalists like these sorts of shortcuts. Said like that, it is just a provocation which does not account for the central point in my thinking, which is that the digital economy is largely based on hidden work, undeclared work that is sometimes unpaid.

Digital platforms enable us to perform activities which bring great benefits to us, but they also lead us to engage in practices which bring great benefits to their owners and investors. The identification of such types of value extraction from society is not a new concept in the social sciences. Before the Internet even existed, the analysis of the invisible labour of women, for example, led to long cycles of struggles for the recognition of this work, which occurred from the 1960s to the 1980s.

Several research areas converge so as to render visible a new way of understanding a labour that does not tell its name. My understanding of digital labour is part of a theoretical tradition. I can cite Marie-Anne Dujarier and her consumer work, or the whole Italian post-operaismo school, which emphasised immaterial labour, as well as Dallas Walker Smythe’s analysis of audience labour. In the end my thinking on informal labour in the context of digital networks revisits and reinterprets, revitalises these great research traditions, which have sometimes been neglected.

Digital labour occurs in several sectors of the economy. Let’s look first at the sharing economy. With companies like Uber, the peril for workers is obvious from the get-go. Neither the French state nor French city officials have done what the government did in South Korea, that is to say create a ‘counter-Uber’ by encouraging companies like Kakaotaxi, but also by creating an infrastructure that aims to transform Seoul into a “sharing city” (not only for cars, but also for lodgings and objects). This is a counterpower represented by public cooperative platforms… in France, these tensions generated classical forms of conflicts, which were, in my opinion, misunderstood by the press. The media applied old categories, and presented the conflicts of June and September 2015 between Uber and taxis as a defence, by the latter, of the status quo, of an antiquated corporatism. Basically, their argument was: ‘look at these remains of the past which are resurfacing and preventing the emergence of innovation’. The news media milieu is highly influenced by industrial interests and by the neoliberal doxa. And also, they are using an outdated rhetoric: the grand narrative of the forces of obscurantism, resisting innovation. But they did not see that it was a case of one platform battling another platform! And traditional trade unions working closely with new, emerging trade unions. The taxi drivers who burnt a few tires and flipped a car, they did put on quite a show, but they work for a platform, too. It is called for example Taxis Bleus or G7… Journalists did not notice either that in June, taxis were demonstrating against Uber, but in September Uber drivers themselves were organising their own trade union, and rallying in the streets to protest against the San Francisco-based company.

And this is also where research on digital labour progressively departs from previous studies on Internet use, on online contributions, because these studies were focused on content: photos, texts and videos voluntarily published on the Internet. With digital labour, we are less focussing on content as such, and deal a lot more with the metadata hiding behind the content. If I publish a picture on a digital platform, of course the human eye will look at the subject of the image, but the algorithm (the machine’s eye, so to speak) will zero in on the metadata. For example, the date, the place, the timestamp, the camera, the IP address on which the photo was routed. So, there are two completely different ways to think about the possible uses of this photo: academics who are interested in online engagement will analyse the wealth of content, the drive to participation, generosity, etc, but those who analyse how data is exploited and how wealth is captured by platforms will concentrate on the economics of the transformation of data into commercial value…

The question, then, is that of the value produced by platform users and of how it should be identified. And I will start by saying that we should not fall into the trap of considering such value as produced by each individual independently of all others.

The main problem is that, too often, researchers play into the hands of platform owners by concentrating on individual production and individual contributions. However, these contributions are intertwined. They are always collective, social activities. My data, my content has no intrinsic value, it only acquires value inasmuch as it is connected to my social graph, as I am linked to other profiles, other pages, other entities: there is a network effect. So, value is never singular, it does not originate from a social void. In contrast, platforms insist that contributions should be evaluated individually. Why? Because obviously for them, this approach has the benefit of atomising, fragmenting the efforts for recognition of digital labourers who end up being remunerated according to discrete tasks, and mostly very poorly. If you read the scientific literature on the various aspects of digital labour, you will see that these studies are often led by researchers working (or partnering) with the very firms that dominate the tech world. Facebook, Google and large telco companies have been trying to figure out for a while at what cost users would be prepared to sell their data, just in case…

Translated from the French by Mathieu O’Neil

This post presents extracts from an interview given by Casilli to the French-language INA Global site. The original article is here: http://www.inaglobal.fr/numerique/article/le-digital-labor-une-question-de-societe-8763

Biographical note: Italian-born Antonio Casilli has emerged as one of the preeminent theoreticians of online sociality in the French speaking world. Casilli teaches at Telecom ParisTech (the Telecommunication College of the Paris Institute of Technology) and also runs a monthly seminar on Theoretical and practical approaches of digital cultures at the prestigious École des hautes études en sciences sociales (EHESS). In 2015 Casilli co-authored Qu’est-ce que le Digital Labor? (‘What is digital labour?’). He can be found online at http://www.casilli.fr/