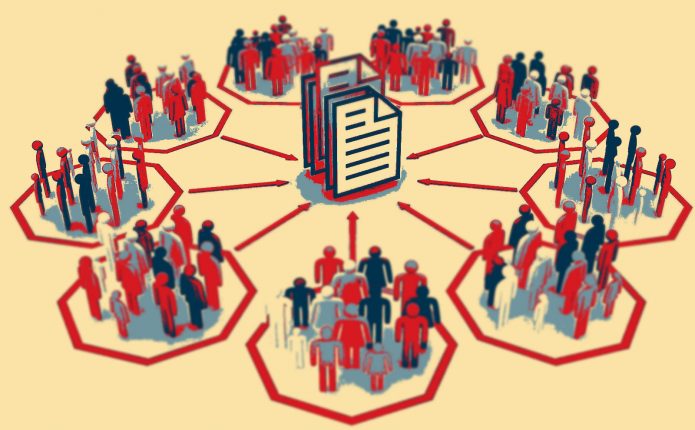 Whenever I hear a businessman talk about building a “healthy society”, my sociologist sense tingles… And although I haven’t been discussing Zuckerberg’s recent tirade, I feel reassured by the fast and compelling reactions I’ve read. Countering Zuckerberg’s brand of simplistic technodeterminism is crucial. For instance, you might want to examine Aral Balkan’s piece, or appreciate the relentless logic of Annalee Newitz, exposing contradictions and dangers in the manifesto.

Of course, we’ve been here before. Facebook’s founder customarily posts messages, rants, and edicts. And unfortunately their criticism is not enough. Because there is a performativity to Zuckerberg’s essays. Although they are constantly spinned to the media as heart-felt cries from Mark-Zuckerberg-the-person, they actually serve as program frameworks for the company run by Mark-Zuckerberg-the-CEO. The fact of stemming from “trainwrecks” (term used by both Annalee Newitz and danah boyd in a seminal paper penned almost a decade ago) doesn’t diminish the power of these pronouncements.

Capitalism feeds on crises. And Facebook (being the ultimate capitalist scheme) feeds on “trainwrecks”— it uses them as devices to establish its dominance. So the 2008/9 “privacy trainwreck” jumpstarted its extensive market for personal data. The 2013 “connectivity crisis” spawned Free Basics. And what will the 2016 “fake news disaster” be exploited for? Smart money says: “turning Facebook’s colossal user-base in a training ground for AI”.

Admittedly, this doesn’t come as a surprise. The ambition to “solve AI” by extracting free/micropaid digital labor from users is evident. Facebook AI Research (FAIR) division is devoted to “advancing the field of machine intelligence and to give people better ways to communicate” by relying on quality datasets produced by… people communicating on Facebook.

What is new is how the “fake news trainwreck” has ended up supporting this ambition by turning Facebook human users into a “social infrastructure” for AI (cf. Zuckerberg). More importantly, it provides a rationale for the company’s strategy. And throws in “terror” for good measure, to render it unavoidable…:

“A healthy society needs these communities to support our personal, emotional and spiritual needs. In a world where this physical social infrastructure has been declining, we have a real opportunity to help strengthen these communities and the social fabric of our society. (…) The guiding principles are that the Community Standards should reflect the cultural norms of our community, that each person should see as little objectionable content as possible, and each person should be able to share what they want while being told they cannot share something as little as possible. The approach is to combine creating a large-scale democratic process to determine standards with AI to help enforce them. (…) Right now, we’re starting to explore ways to use AI to tell the difference between news stories about terrorism and actual terrorist propaganda so we can quickly remove anyone trying to use our services to recruit for a terrorist organization. This is technically difficult as it requires building AI that can read and understand news, but we need to work on this to help fight terrorism worldwide. (…) The path forward is to recognize that a global community needs social infrastructure to keep us safe from threats around the world, and that our community is uniquely positioned to prevent disasters, help during crises, and rebuild afterwards. Keeping the global community safe is an important part of our mission — and an important part of how we’ll measure our progress going forward.”