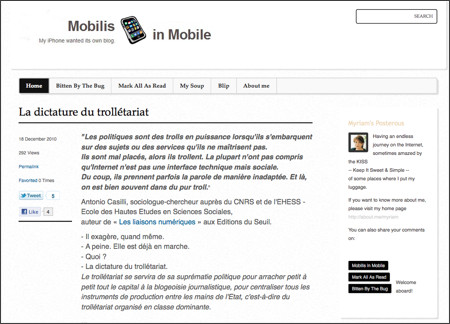 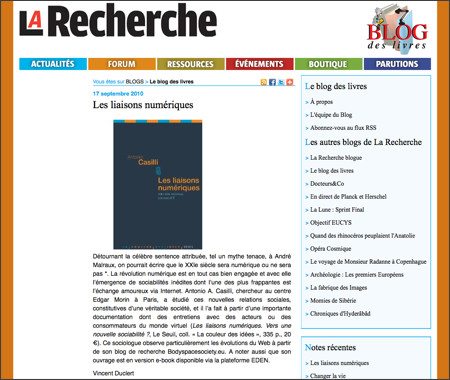 What Casilli’s work shows though is that homophily is not as intense as one might expect considering the level of choices and options. On the surface, homophily does seem to apply, but on a deeper level, through the use of social networking platforms such as blogs, individuals studied by Casilli were able to reach segments of the population broader than just their similars. Heterophily then can be triggered through what Casilli calls computer-assisted social processes and computer-assisted social interactions. This is a new way in which the personal and the political can merge in new forms of political activism (disclaimer: I have repeatedly expressed my skepticism regarding the effectiveness of ICTs when it comes to political activism but there is no questioning the existence of such forms).

When it comes to social relationships, though, new layers and dimensions are added through social networking platforms such as Facebook or Twitter. We have already heard of Facebook break-ups and divorces. Defriending or unfollowing are highly charged actions integrated into other dimensions of social relations. At the same time, Goffman would have had a field day with the many ways in which we manage the presentation of self on social networking platforms and how we sometimes fail and embarrassing photos get viewed by the world and one can lose one’s job. Identity management becomes a business in itself as the public / private distinctions become blurry. (GlobalSociology)