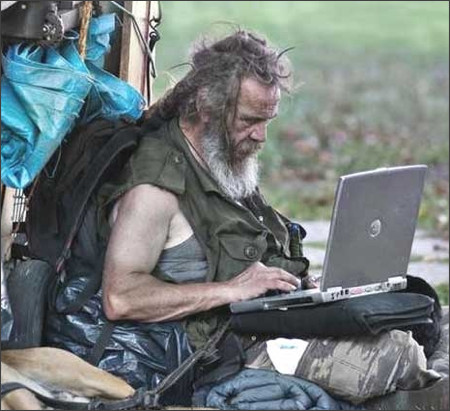 END_OF_DOCUMENT_TOKEN_TO_BE_REPLACED

So, bottom line, Chatroulette goes something like: you log in, you bump into someone, you evaluate, you click on “next”. Basically, each time you connect you have to ask yourself “Do I like this person?”. If you do, just go on chatting. If you don’t, just “next”  him/her and the service puts you in contact with someone else, anybody else. It might be a teenage boy making faces, or a beautiful girl with a generous cleavage, or an old pervert doing whatever it is that perverts do on-screen. END_OF_DOCUMENT_TOKEN_TO_BE_REPLACED END_OF_DOCUMENT_TOKEN_TO_BE_REPLACED

New paper shows social connectivity is not declining (not because of Internet, anyway)

The story so far, can be summarized as follows: since the beginning of the Web, a significant amount of researches has being focusing on the inverse correlation between online connectivity and face-to-face interactions. In social sciences, this is known as “the Internet Paradox”, after the title of an influential article published by Robert Kraut (1998). In a nutshell,  Internet can be regarded as a “social technology that reduces social involvement”. Consequently user’s well-being and social ties could be negatively affected by computer-mediated communication.

This argument was so compelling – and so remenescent of the common sense claim that “since computers are around, people don’t talk anymore” – that the Internet paradox long outlived its scientific credibility. Some years later, Kraut himself made amends for it in a follow-up article, admitting that his argument had to be “rivisited”.  He went back to observe the very same families of the previous study and found the negative effect of online communication on social life had disappeared. Not only, but he even detected positive effects of using the Internet on communication, social involvement, and well-being. A hell of a retraction, if you ask me.

Now, as epistemologists know, bad theories are difficult to flush out. Especially when you have people who can exploit them to serve their political agenda – or to spin themselves a cheap media story, as recently a certain British fellow of the Royal Society of Medicine did.

Luckily for us, Canadian sociologist Barry Wellman has been fighting against this research trend since its first apperence. And luckily for us, these days he seems to be prevailing. END_OF_DOCUMENT_TOKEN_TO_BE_REPLACED