The other articles veer between platitudes (“Remember: trolling is not allowed” – Tim Dowling Dealing with trolls: a guide Dealing with trolls: a guide), technodeterministic assumptions about privacy (“The era of online anonymity may be moving to a close” – Owen Bowcott Bill targeting internet ‘trolls’ gets wary welcome from websites), and sheer pedantry (“The term has been misappropriated to the point of being just another bland synonym” – James Ball You’re calling that a troll? Are you winding me up?). There’s even a pictorial tribute to the familiar trope of the ugly-and-frustrated-Internet-user, in a gallery of online pests drawn by artist Lucy Pepper (a balding Star War geek, a couple of drunk women, an archetypal guy in tweed, an acne-ridden bespectacled teenager, and so on…). 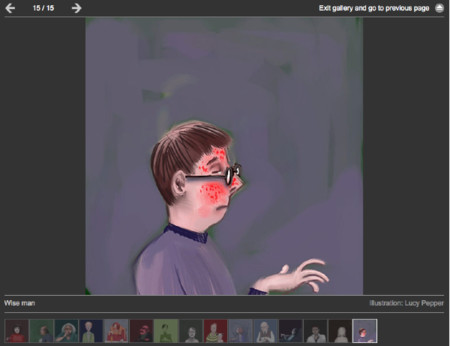 Drawings of internet trolls – in pictures | Technology | The Guardian

Understandably, mainstream media have no option but to back British government liberticidal political agenda. They have to protect themselves from the accusation of providing a venue for trolls in the discussion section of their online editions. So they end up drawing an imaginary line separating the exquisite prose of news professionals from the wild speculations and verbal abuse carried out by obnoxious boors. And this imaginary line corresponds roughly to the Post a comment headline of every article.

The Guardian‘s Zoe Williams is particularly adamant about this: she is allowed to troll, because she’s a journalist and she knows how to fine-tune her rhetoric.

Of course it’s possible to troll at a much less violent level, simply by stalking through internet communities where people might be expected to think in a particular way, and saying things that will wind them up. If you would like to try this sort of trolling to see what the appeal is, I suggest you go on to the Comment is Free section of the Guardian’s website and post something like, “People shouldn’t have kids if they can’t afford to pay for them.” Or: “men like skinny women, which is why you won’t be able to find me a banker with a fat wife. WILL YOU?” Or: “Men like sex. Women like cuddles. GET OVER IT.” Or: “Nobody even knows what’s in a greenhouse gas. How can I take ‘climate change’ seriously when nobody knows anything about it?” Amusingly, I am getting quite wound up by these remarks, even though it was me who made them.

Social determinants of trolling should not be underestimated

As a concerned citizen and an academic who’s been studying and writing about confrontational online interactions over the last few years (if you read French, cf. here, here and here), I regard this kind of media narratives as highly dishonest and ill-informed.

Whenever trolls are portrayed in the media, their actions are usually explained in terms of ‘perversion’, ‘narcissism’, ‘disinhibition’. Notions such as these, pertaining to the domain of clinical psychology, conceal the underlying social determinants of trolling. This type of online behaviour is not an individual phenomenon. On the contrary, it’s a social process: one is always somebody else’s troll.

Moreover, trolling has a collective dimension to it. People troll to prompt changes in the structural positioning of individuals in online networks. Some do it to become more central, by attracting attention and gaining followers. Others do it to push competitors to the margins of an online community. Sometimes, trolling is used to challenge other’s authority and to reshape hierarchies that are established in discussion forums or online media. From this point of view, despite their disruptive attitude, trolls can end up helping online communities evolve – and digital cultures develop new contents and stances. The trolls and the online public sphere

Trolling is a complex phenomenon that is brought about by the fact that online social structures are based on weak ties. Loyalties, common values and emotional proximity are not always crucial when it comes to online networks opening up new avenues for sociability by putting users in contact with perfect strangers. This is the main output of the social Web, and this is also what makes trolling possible: ‘perfect strangers’ are often far from perfect. Thus, trolling is not to be interpreted as an aberration of internet sociality, but as one of its facets. And politicians cannot dismiss it or repress it without preventing one of the main sources of difference and innovation of online sociability: the fact of being confronted with unfamiliar contents, postures, and reactions.

The harsh reactions trolls prompt at the political level are to be read as windows into wider social issues and paradoxes. Mainly, the proposed amendment to the Defamation Bill is a power display by a goverment in need to demonstrate  it still can regulate online speech in order to deliver on the promises of access to a democratic debate for a maximum amount of citizens in a situation of maximum uncertainty. In this sense, trolling threatens to short-circuit and refashion in a conflictual and dialectical way the civilized discussion modern democracies still regard as their ideal political space. The very existence of anonymous, intolerant and inappropriate trolls attests the fact that the ‘public sphere’ – described by German philosopher Jürgen Habermas as a space governed by the integrating force of contextualized language, tolerance and believable appearance – is largely a delusional concept.

The point of the public sphere is obvious: it is supposed to be the location of those standards and measures that belong to no one but apply to everyone. It is to be the location of the universal. The problem is not that there is no universal–the universal, the absolutely true, exists, and I know what it is. The problem is that you know, too, and that we know different things, which puts us right back where we were a few sentences ago, armed with universal judgments that are irreconcilable, all dressed up and nowhere to go for an authoritative adjudication. What to do? Well, you do the only thing you can do, the only honest thing: you assert that your universal is the true one, even though your adversaries clearly do not accept it, and you do not attribute their recalcitrance to insanity or mere criminality – the desired public categories of condemnation – but to the fact, regrettable as it may be, that they are in the grip of a set of beliefs that is false. And there you have to leave it, because the next step, the step of proving the falseness of their beliefs to everyone, including those in their grip, is not a step available to us as finite situated human beings. We have to live with the knowledge of two things: that we are absolutely right and that there is no generally accepted measure by which our rightness can be independently validated. That’s just the way it is, and we should just get on with it, acting in accordance with our true beliefs (what else could we do?) without expecting that some God will descend, like the duck in the old Groucho Marx TV show, and tell us that we have uttered the true and secret word.