[Update Feb. 11 2013: This post has been also published in the French edition of the Huffingtonpost and featured in Andrew Sullivan’s The Dish as well as in the Catholic Herald.]

let me start by saying that I am not a christian, plus I am not particularly appreciative of your work. I am but a modest scholar of digital cultures who has been following, with a professional eye, your recent effort to rebrand your online image. By now, the general public is aware that you and your staff operate the Twitter account @pontifex – and its multilingual permutations @pontifex_fr, pontifex_it, pontifex_es… My sources indicate that this is the brainchild of Jesuit cybertheologian Antonio Spadaro, counselor of the Pontifical Council for Social Communications 1. So it seems only obvious that the Jesuit magazine Popoli commissioned a study to assess how well your online presence has been perceived after a month on Twitter. On the face of it, you did fine. You have been sending out approximately 100 messages in 9 languages, and earned more than 2 million followers altogether. Moreover, you have generated 270,456 responses from your fellow users.

This impressive amount of comments was also used to perform a “sentiment analysis”, to determine the general attitude of the Twittersphere. About 82% of the feedback received was “neutral”, a meager 10% was positive, and 8% negative. Let me break it down for you, Your Holiness: sentiment-wise, your entrance on Twitter has been saluted by a roaring “meh”… The not so brilliant results are summarized in the following infographic:

Trolling: why nobody expects the Spanish inquisition

And yet, how refreshingly honest of your web strategy advisors to detail the main contents of the tens of thousands of negative tweets:

Now it would be too easy for you, Your Holiness, to dismiss these tweets as the work of evil Internet trolls. I know that’s what your colleagues – political personalities and religious leaders – would do, and that the mainstream media encourage it.  Contemporary heads of state simply cannot process the transformations of the public debate that the Internet has brought forth. They still think they are dealing with a traditional “public sphere” – and a civilized one at that. German philosopher Jürgen Habermas described this ideal political arena as a space governed by the integrating force of contextualized language (I utter sentences that are coherent with the general tone of the debate), tolerance (I acknowledge opinions differing from my own) and believable appearance (I am recognizable as part of a public whose actions bear on the organization of society). But the very existence of virtually anonymous, intolerant and inappropriate trolls attests the fact that the democratic public sphere is largely a delusional concept.

Luckily, Your Holiness, you are not a democratic leader. I know you won’t take that as an insult, as I am simply trying to establish a political matter of fact. You are the ruler of a theocracy. Your particular brand of government (as reflected by the somewhat… well, “pontificating” tone of your tweets) is not exactly conducive to a situation where access to a democratic debate is allowed to a maximum amount of individuals. So I don’t see why your political space should be characterized as a public sphere. And it strikes as an evidence that you are used to trolling, because you and your predecessors all throughout the centuries have been the target of some form of it. Of course, back then it went by other names: heresy, blasphemy, apostasy… Assuredly, the tone and contents of the negative comments conveyed on Twitter were not dissimilar from long-lasting criticisms of the Catholic church: sexual misconduct, clerical corruption, opinions contrary to the Catholic faith about the divinity of Christ or apostolic dignity, and so on.

Indeed, it would be too easy – and historically inaccurate – to declare that trolls are the modern versions of past heretical thinkers such as Girolamo Savonarola, Giordano Bruno, Martin Luther. It would also mean betraying the Roman Catholic Church’s intentions as to the way of dealing with them. Your digital analysts have been adamant about that: these negative comments will not prompt your condemnation. Nobody expects the Spanish Inquisition, as the old adage goes – and for once, nobody will have it.

“People are there. They are there with their problems, their questions and also their criticisms. And it’s important for the church to be there and to dialogue with those who are furthest from it or most critical of it.”
[Stefano Femminis, editor in chief of the Jesuit magazine Popoli]

Establishing a dialogue with trolls sounds nice. Probably better than ancient excommunications, or than modern-day criminal prosecutions. By reading your official message for the 47th world communications day, as well as the Pontifical Council for Social Communications position statement about social networking, I can see what you intend to achieve by that. In short: trolls are not to be repressed, they are to be evangelized. They are but people who, albeit “far from the catholic faith”, bear “real and urgent requests, as they face doubts and challenges that are consistent with today’s existence”. Despite their bitter remarks and controversial antics, they appear to be “on their own quest for the meaning of human life”.

The problem, of course, is how to reach out to them trolls. Especially as you seem to be well aware that “the most treacherous risk” when interacting in a social media environment is “that of interacting only with those who already share our points of view”. In social sciences, we have a name for this phenomenon: homophily, i. e. the tendency to form ties with persons similar to us on the basis of their attributes, status or beliefs.

Sociologists studying religions have pointed out religious homophily has negative effects on social capital. Since the inception of the social Web, there’s been much debate within the scientific community. Do computer-mediated communications encourage homophily or, on the contrary, they allow us to escape the echo chambers of homophilic worldviews? To tell the truth, the jury is still out on that one. What we know for sure is that, in order to avoid homophily on Twitter, you should probably ask not how varied are the opinions and sentiments of those who follow you. Your followers are more than 2 millions: they are statistically bound to show some diversity. You might want to increase this diversity, so to be sure your message reaches the maximum amount of trolls.

In this case what you should really worry about, is the diversity of who you follow. Because that tells a lot about you, what type of Twitter user you are, and the amount of homophily you will stir.

Your Twitter account is of a peculiar type. It is a generator (of contents, communication, ties, etc.). But that does not necessarily make you popular, influential or authoritative. In fact, spammers, bots, and Justin Bieber fall in that same category. And they are hardly the kind of persons one would take spiritual advice from. Being a generator is just a quantitative feature: it means you have a very small amount of people you follow, compared to the number of people who follow you. Some past studies have shown that, if you are a generator, you still have good chances of following people that look like you. Which in your case is totally true: your nine multilingual @pontifex accounts exclusively follow one other. 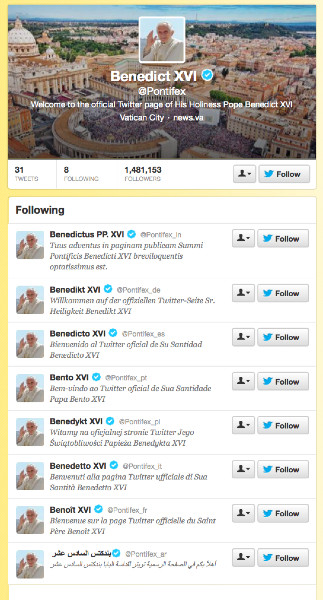 That spells bad news. Such a self-similar circle of followees implies you receive information from the very same person(s). Now you might be infallible, but as of today your network sure does not span multiple knowledge domains. In social network analysis parlance, this translates as a small network range, and a less effective transfer of knowledge and information. And in layman’s terms, this means that if you go on following only yourself, your message will become more and more self-referential, and appeal to a less and less diverse population.