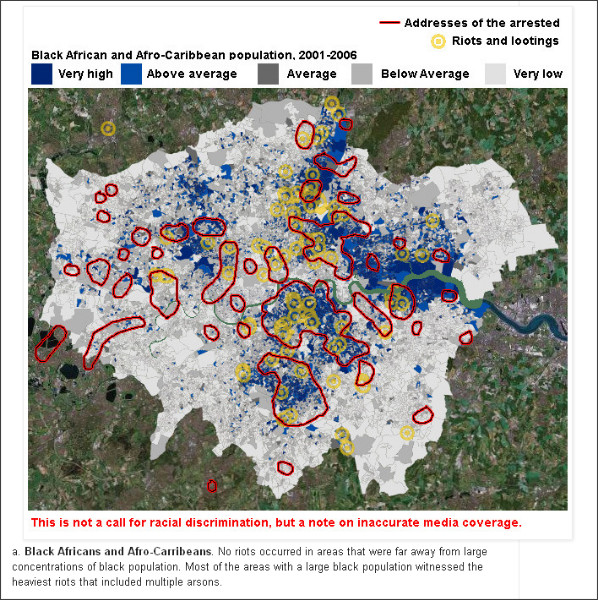 Just to pound the point home, the Nameless Blogger exploits another source of data: Police CCTV pictures of suspects in the 3 largest riot locations (London, Birmingham and Wolverhampton). And, again, the pictures are emblematic of the kind of agenda our blogger is pushing. Organized in photo albums, they are saturated with red warnings, representing ethnically black rioters. 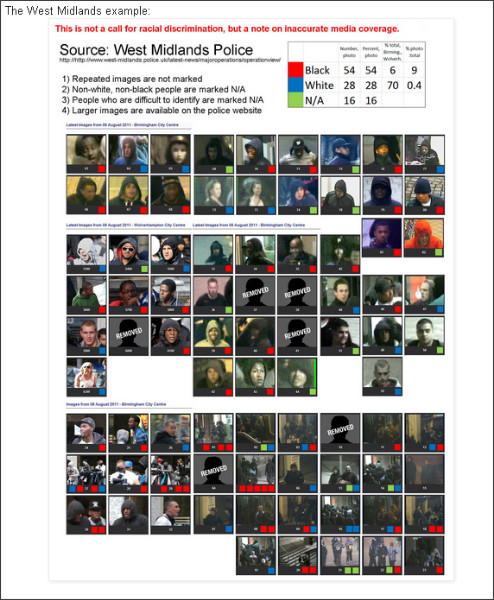 Of course correlation does not imply causation and data of this kind, if anything, might be held indicative of police biases. More importantly, these pictures are less valuable for the data they illustrate than for the little red line they exhibit, reading “This is not a call for racial discrimination, but a note on inaccurate media coverage”.

What is our blogger talking about? Those of you who have not been following the UK media coverage of the August 2011 riots have maybe missed the controversy raised by historian David Starkey, openly blaming the riots on “black gang culture”. In a recent BBC televised debate Starkey’s intellectual opponent, so to speak, was Owen Jones who has recently published Chavs: The Demonization of the Working Class.

Although Jones’s book is a vindication of popular culture against the caricature of the intellectually impoverished working class propagated in recent years, for a fortuitous media short-circuit, its author comes out as putting the blame for the riots of the underprivileged white yobs  instead than on black lower-classes.

Supposedly, this is the kind of “inaccurate media coverage” our Nameless Blogger is rebelling against when s/he says:

“The media seem to focus exclusively on the social class of the August rioters, while claiming the absence of a large ethnocultural undercurrent. There is an excessive concentration on ‘chavs’ or ‘yobs’, who are understood to be white. However, chavs form but a minority of rioters and looters, while the disproportionate majority is Black African and Afro-Caribbean.”

The kind of statistical exercises s/he indulges in are just about as good as the explanation provided for the observed correlations they point at. And in this case the explanation is poorly argumented and with clear racist undertones:

“Both theoretical and empirical evidence shows that it is improper to disconnect the August 2011 riots from race and ethnic culture. It is, likewise, inappropriate to associate it with the uneducated, low-skilled white lower class (‘chavs’). It was severely underrepresented in the riots, and did not produce riots in numerous poor non-black areas.”

Not the shadow of a correlation test to check if these results are robust. And yet, the Nameless Blogger goes on: when compared with other variables, ethnicity has the best predicting power. To hell with socio-economic factors: they are subject to “dispute”. That the black unemployed are overly violent, now – *that* is a fact.

“None of the socioeconomic factors have the same predicting power as black ethnicity in this case. In fact, they are meaningless to the riots when not a correlate of black population. Why the black community played such a prominent role in the riots may be disputed. But it is clear that role of the black community was greater than that of any other group, and it should be accordingly regarded in the media.”

On a final note…

These few lines were not intended to undermine coming analyses exploring the role that race, segregation, and racial discrimination might have had in affecting the recent political events in the UK. In fact, several studies have outlined the way culture and ethnicity play out in shaping political conflict in different countries (see e.g. D. Waddington, F. Jobard & M. King (eds.) Rioting in the UK and France: A Comparative Analysis, Devon: Willan Publishing, 2009).

Consider our words a cautionary tale about the century-old struggle between theory and experience. If it’s true – as the remark mentioned at the beginning has it – that our theoretical modelling of the UK riots is just an “opinion cloaked in technology”, evidence like the one offered by our Nameless Statistician can be regarded as nothing but an opinion crutched by data.

Let’s agree that any scientific production is a form of situated knowledge, and that as such it cannot prescind from the opinions and cultural orientations of the scientists involved. Let’s keep this in mind while choosing the facts to substantiate our political decisions in times of political instability…