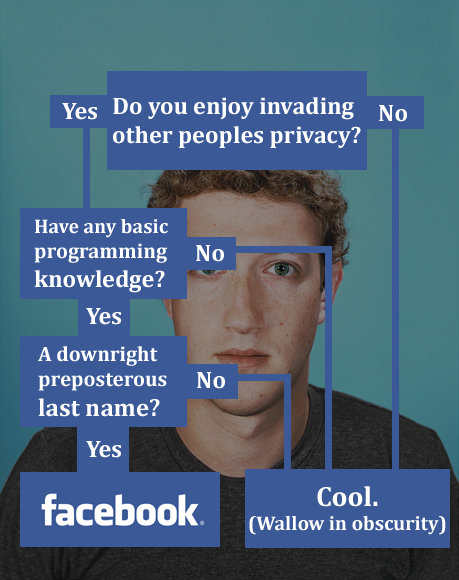 Here’s the translation of my op-ed published in the Sunday, Jan. 19, 2014 edition of the italian newspaper Il Corriere della Sera (supplement ‘La Lettura’).

The greatest trick Facebook ever pulled, was convincing the world that privacy no longer exists. In recent years, Mark Zuckerberg has multiplied such statements: according to the founder of the popular social media, “the new norm” is transparency, a public life. The hypothesis of the end of privacy is presented as an inevitable and spontaneous evolution of social conventions adopted by the users of social networking services. In the light of such claims, everything finds an explanation, everything becomes part of a grand historical narrative, leading from the isolated and alienated existence of past century’s great industrial cities, to today’s harmonious and interconnected online communities. What Zuckerberg does not say is that history is less linear than he argues, and its users not so eager to comply.

Over privacy settings, an actual war has been fought for years. From 2006 to 2013, Facebook has proposed 10 revisions to its terms of service having major consequences on personal data management. They led to 10 privacy incidents and protest campaigns supported by grassroots organizations and involving the US Senate, the Federal Trade Commission, as well as the data protection authorities of Ireland, France and Germany. In 8 out of 10 cases, Facebook had to back off and Zuckerberg had to officially apologize. Facebook’s future evolution is likely to be profoundly affected by its founder’s misrepresentations and half-truths. Privacy has not disappeared, it has morphed. From an individual right it has turned into a collective negotiation. A negotiation between states, businesses, and civil society—to decide who has the right to access personal data and for what purpose. And between users themselves, to have the right to decide every day what to share and with whom.

The revelations of Edward Snowden, the former CIA employee who unveiled the system of mass surveillance operated by the National Security Agency, have shown that privacy is, excruciatingly, at the very center of the public space. The DataGate also succeeded in highlighting the hesitant and hypocritical attitude displayed by Facebook, sometimes playing the accomplice, sometimes the victim of the NSA.

At present, governments are multiplying their conflicting pressures, on the one hand to reveal their citizens’ personal data, on the other to protect them. In the next few years, Facebook may be torn apart by these legal and political tensions, to which so far the company has reacted by sheer denial. Those same tensions might ultimately elucidate the warning signs of its cultural decline.

The Italian text (along with a French translation) is available here.

Further reading : my latest book Against the hypothesis of the « end of privacy » in social media: An agent-based modeling approach, co-authored with Paola Tubaro and Yasaman Sarabi, just published by Springer.