Anyway, turns out the biomedical engineer is actually a doctoral student who managed to spin his dissertation on the general purpose brain-computer interface BCI2000 and to sell it the media that, as of today, uncritically buy into anything having the word Twitter in it. Now, there’s nothing wrong in trying to hype up something so plain as an interface designed mainly for acquiring data and motoring brain functions. I mean, everybody and his sister is name-dropping Twitter, why shouldn’t Wilson ?

Well I can come up with at least one reason. Because the guy says he’s doing SCIENCE (spelled in capital letters, according to his twitter profile). The kind of science that, so the legend goes, is based on peer-reviewed articles reporting the results of carefully carried out studies and experiments. Instead what have we got here? Look from whom he took the idea: 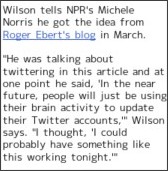 Your Brain On Twitter: No Hands Necessary : NPR via kwout

Roger Ebert?!? Like in “Roger Ebert the film critic”? “Roger Ebert the author of Your movie sucks“? “Roger Ebert the author of the screenplay of x-rated classic Beyond the Valley of the Dolls“? Don’t get me wrong. I think Ebert is a pretty decent film critic, and I have nothing against people writing tits’n’ass stuff. But saying he provided the inspiration for such a scientific breakthrough kind of casts a shadow of quackery over the entire thing… What would you think if I claimed my landmark sociological study establishing that Internet cures cancer was actually inspired by a half-drunk statement from Gogol Bordello’s front man Eugene Hütz? I mean, the man is practically a genius, but he didn’t make into any scientific evaluation committee. Yet.

All of this story reminded me of a dystopian scenario recently featured in the scientific portal Researchblogging.org:

Beyond “peer review”: Should our guidelines become more inclusive? | ResearchBlogging.org News via kwout

Yeah, Wilson just discovered the “Twitter neuron”, and has sold it to the media – with the blessing of his peers and colleagues at the University of Wisconsin–Madison who will be, no doubt, able to bank on his discovery. Think about it, next time you spend four months writing a paper that will most likely be rejected by two anonymous referees when submitted to the Journal of Pompous Science and Pedant Research…