1) Define “avatar”. An avatar is a technologically-enhanced surrogate body that a user “wears” to perform physically challenging tasks. The Sanskrit word avatara, originally meant “embodiment of a god” and was mainly used to describe the human form Hindu god Vishnu used to assume to interact with mortal beings. In today’s popular culture it designates the presence of a human agent in a technologically-intensive environment. See for instance informational habitats: from popular applications like Messenger, to forgotten 3d communities such as Cybertown – the little bugger is all over the web.

An avatar in the online world Cybertown (ca. 1999)

2)Who came up with that? Apart from the Hindus, you mean? Well, French author Théophile Gautier published a novel by the same title in 1856. The main character, Octave, is a disabled young man that a mysterious doctor “who just came back from India” heals by swapping his body with a brand new one via an “electromagnetic equipment”. Admittedly, it sounds like James Cameron’s movie – Jake and his Na’vi alter ego through and through.

I could substantiate this lineage by dropping a number of authoritative references (I sure do it in the article). But sometimes an image is worth a thousand words. So here are three images equal, three thousand words I spare you. 3) So why is it blue? Yeah, that is a question Cameron gets a lot. How come the Na’vi are blue if they inhabit a “green planet”. Shouldn’t they be, like – green? Now, there is one explanation which points to the technological limitations that Cameron met when first he was developing the script. Back in the 1990s CGI-generated characters were difficult to render when it came to skins and hair. Thus the enormous amount of smooth, cerulean silhouettes in those years imagery. But, allegedly, Cameron’s movie took so long to be released precisely because he wanted to wait for the “technology to catch up with his vision”. Turns out his “vision” was borrowing too from the cultural and visual canon that had shaped all the avatars before him. The religious origin of the avatara sets the tone here. Middle- and far-Eastern religions are packed with blue-skinned gods: Brahma, Vishnu and Shiva (to say nothing of Krishna) in the Hindu tradition are all represented as blue men [for more details, see comment of Dec 29th, 2009 15 h 24 to this post], as well as the Shinto moon-god Tsuki-Yomi, the Egyptian goddess of the sky Nut, the Chinese god of justice Lei Kung, etc.

Of course popular iconography plays a major role too. Especially superhero, comics. Apart from the aforementioned Doc Manhattan, the trope of the blue body recurs in all kind of story involving superpowered beings. Again, one image instead of a thousand words – it’s a win-win!

4) What’s with the wheelchair? Jack Sully is a grunt wounded in battle, confined to a wheelchair. His physical disability highlights the gap between his actual body (his transient body, the “natural” organism that suffers from injuries and pain) and his idealized avatar (his sublime body, which is not subject to accidents and enjoys the pleasures of life in Pandora). Definitely, we put our finger on a major trope here. Other movies dealing with avatars have resorted to paralyzed characters in the past (see below). Question: was it necessary to use a wheelchair to “highlight the gap” between a regular Joe and a cat-eyed giant blue alien? Weren’t they different enough? Again, it’s a matter of borrowing – again from the superhero lore.

Like Kantorowicz’s kings, superbeings have two bodies: a “secret identity” and a costume-wearing, public identity. While the latter displays all the signs of physical perfection, the former is burdened by some form of disability. Clark Kent’s signature glasses might have appeared as incapacitating enough back in 1938, when Superman first was published. Over time, physically-challenged alter egos have become a distinguishing feature of superheroes while not sporting their crime-fighting personas: Matt Murdok/Daredevil is blind, Don Blake/Thor limps – even Bruce Wayne/Batman is in a wheelchair after supervillain Bane breaks his back in the climatic issue #497 (1993). (Umberto Eco first developed this idea in (1978) Il Superuomo di Massa: Retorica e Ideologia nel Romanzo Popolare, Milano, Bompiani)

I think you got the point, no need for me to go on an on. Anyway, if you were interested in me ranting, you would have read the article already. 😉 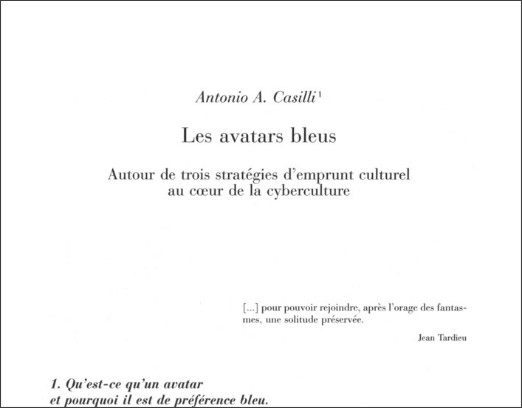