The reason I ramble on about this topic is that the end of July is a moment of calm, when I can devote myself to my obscure interests, like mulling over what went wrong/right [pick one] with Mao Tse-Tung’s China. And summer is also good for reading, on the beach or in the countryside. So two books of short stories about the Cultural Revolution have attracted my attention. [Well, this is an understatement actually: I’ve been obsessed with them for months and I’ve been actively tracking them down through international booksellers…]. The first one is Xujun Eberlein’s Apologies Forthcoming: Stories not about Mao (Hong Kong, Blacksmith Books, 2009) and the second is The Execution of Mayor Yin and Other Stories from the Great Proletarian Cultural Revolution (Bloomington, Indiana University Press, 1978) by Chen Ruoxi – or Ch’en Jo-Hsi, if you prefer the Wade-Giles romanization.

Two writers – both women, both émigrés to the US, both delivering their heartfelt and humane record of the same historical period. Yet two books immensely different. Where Ruoxi adopts a pragmatic stance to describe the alienation and complicacy of life in communist China, Eberlein overindulges in nostalgic evocations of the familiar atmosphere of her youth.

The thirty years that separate the two books (and the inevitable change in Chinese sensibility after the Deng Xiaoping years) cannot account for this difference. There is a more fundamental gap between a true “socially realistic” author and a “revolutionary romantic” one. Ironically, the self-styled apolitical Xujun Eberlein falls in the latter category, as she touches on extreme rural poverty (Disciple of the Masses), murder (Watch the Thrill) , and even the death of her own teenage sister (Feathers) with the vigorous enjoyment of a grown-up humming along a CD of  childhood cartoon theme songs. By comparison, Ruoxi – who left Mao’s China because she felt the authentic socialist values of the cultural revolution had been betrayed – comes out as a callous soul, with a talent for bringing up the tragic side of the human condition, whether she’s narrating the ruses of a flirtatious wife (Residency Check) or describing the calm weekend of a well-off Beijing bachelor (the splendid Keng Erh in Peking). 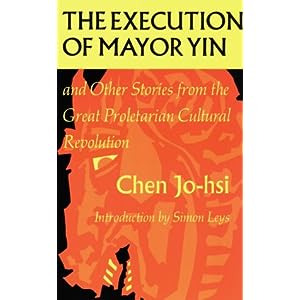 Mao himself described the Cultural Revolution as a social experiment in destructive design. “Put destruction first”, he claimed in his May 16, 1966 Circular of the Central Committee of the Communist Party, “and in the process you have construction”. I can understand the appeal such words can have on 1960s high-school kids all around the world, from the Red Guards in Nanjing to the Maoists of the Quartier Latin. After all, the words of tyrants and fanatics never fail to strike a chord in idealistic youngsters – or maybe that is old callous-soul me talking. What intrigues me, still, is the variety of human reactions in the face of this collaborative, emergent destruction.  Sociologists would say that, eventually, there is a threshold that once passed precipitates events, makes things irreparable. Of course, these two books and the surprising attitudes they give evidence of – between longing and victimization, between everyday tragedy and memories of yesteryear – are part of an ongoing effort to start sheding a little light on that.