(For those who are not familiar with the rule, it states that for every person who posts online contents, there are 9 that just share and comment, and 90 that just lurk) 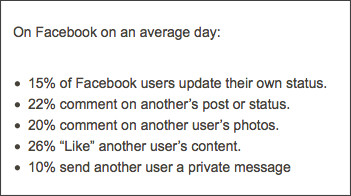 These ‘sleeping’ social ties are known in Social Networks Analysis as “maintained” social capital. This is old news actually. Here’s an article from 2007 saying pretty much the same thing.

This kinda puts the gap Facebook/IRL in perspective, doesn’t it ? Facebook confirms itself as an online network aimed at matching offline-social structures.

Fact #6: LinkedIn is the top SNS in terms of political participation.

Forget about ‘Twitter revolutions’. Looks like political participation is still linked to that thing, called ‘participation in the workforce’… #Marx #isityou