Whether you like it or not (I’m more on the “not” side, but then again I’m European…), this is the way it works. And lobbying might not always be a bad thing. For politicians, this means growing independent from their voters base (and from the State-based corporation and tycoons financing their election campaign) and serve national interests, not only local/industry ones. Some lobbyists are not-for profit organizations working pro bono publico. And some decent folks (citizen groups, grassroots associations, social activists of every sort) lobby to convince legislators to take specific actions in favour/against specific legislations. Yet, lobbying implies spending a lot of money, and having a lot of high-placed friends. Which is why big-ass corporations are good at it, and small citizen groups have a hard time staying afloat.

Not only business. Labour unions and nonprofits account for 24% of the lobbyist expenditures. Source: US Office of Government Ethics.

Since the advent of the Web, new tools to overcome access barriers to lobbying are in place. For instance crowdfunding. Kickstart or ActBlue are popular platforms where Average Joes can create causes and invite people to micro-finance them. In some cases things can get really interesting, really quick. (I remember in the heydays of the Obama administration, having witnessed the feat of half a million dollars raised in 24 hours to lobby members of US Congress to pledge in favor of Medicare. To say nothing about the role of online fundraising and small donors in the 2008 US presidential elections. For more on this, see my book Les liaisons numériques, pp. 76-99).

So what happened with SOPA? Well we don’t know actually. There is an incredibly sparse media coverage about the role of lobbying in determining the dramatic turning of coats in the wake of the Jan. 18, 2012 Internet blackout, exemplified by this image.

Number of SOPA/PIPA opponents before and after the Internet blackout. Source: Propublica.org.

On the ProPublica.org website you can read the single anti-SOPA statements of all the US members of Congress. We can assume some of them changed/made up their minds after pondering at the meaning of this law, and its nefarious consequences for free speech. But we also must assume that some of them were effectively targeted by interest and pressure groups, as explained in this pre-blackout Venture Beat piece.

Who am I talking about? For sure, not the grassroot crowdfunding initiatives like We The Lobby who raised a modest 8033 $ to this day. And not the colourful League for Gamers… We must assume an important part of this lobbying was done by computer software, electronics and Internet behemoths who after all have their men on Capitol Hill since the late 1990s. 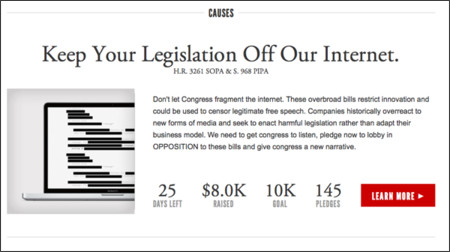 We The Lobby citizen crowdfunding fell short of expectations. Source: We The Lobby.

As in this story there are more things we don’t know than things we know, I would like to conclude these modest remarks by a few questions:

– How much did consumer electronics industry (Apple, Nintendo and the likes) put into anti-SOPA lobbying?

– What has been the role of big investment groups and private equity firms such as TCV or KKR in the anti-SOPA campaing?

– Did the balance between anti-trust investigations-related lobbying and anti-censorship lobbying shift for Internet giants such as Google, Facebook, Microsoft?

– Can we map the Washington lobbying industry? Who are the key players today? Do they count anti-SOPA groups or corporations among their clients?

– Are any of those lobbying and industry groups connected with online free speech advocacy groups and citizen initiatives?

I hope that the journalists, activists, and researchers among you can help provide answers…

[Update] A loyal reader going by the Twitter name of @gag0s thought this post lacked infographics 😉 and pointed us to this imposing (also pre-Jan 18) display of the gap between Entertainment and Tech companies lobbying in 2010/2011. This raises the question whether IT companies are actually using lobbying or PACs to put pressure on politicians (until 2009 it was a mere 10% of the lobbying budget).

Tech companies anti-copyright lobbying remained steady over 12 months. Entertainement lobbying dropped by almost 50%. Where did they invest the bulk of their lobbying money? Source: Politico.