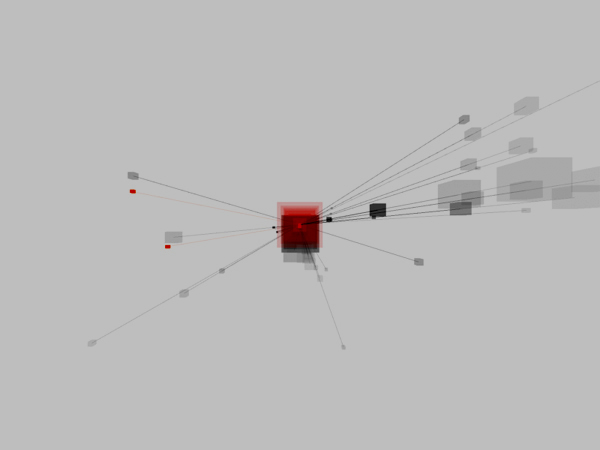 One of the most interesting features of ADMVIII is that it forces us to take into account the role of artificial intelligence in contemporary stock markets. Trading automats (automatic programs, or algorithms) are used to ease the financial transactions and allegedly reduce market risk. One third of the UK trading is now run by bots and three-quarters of trading in the US is now computer-generated. Trading automats have triggered what some believe to be an ‘algorithmic revolution’.

One of their main effects, is the creation of “flash crashes”. As high-frequency trading enabled by the new generation of algorithms allows to make trades in less a millisecond, markets undergo infinitesimal crises every once in a while. In an incident occurred in 2007 at the New York Stock Exchange, a small anomaly resulting by software engineers having used a placeholder value of one penny (one small, tiny penny…) started a chain reaction, triggering thousands of sell orders and, as traders adjusted to what was believed to be an upcoming trend, and in a few minutes some companies’ stocks values plummeted from forty dollars to a few cents. In another such incident, occurred in May 2010, high frequency trading robots caused a 20 minute crash. The estimated loss totalled up to $1000.000.000.000. (Here is the Antidatamining applet which transforms into sound the raw data of the day, recorded from the 9 stock exchanges routed on the NYSE.)

Think of these flash crashes as micro-strokes in the body of an elite athlete: he might keep running, but he’s dying inside a little at the time… Algorithmic trading increases market volatility. That goes against the economic common sense of the 20th century that quicker transactions, by allowing a higher circulation of currency and wealth, result in more liquidity and increased stability. On the other side, that corroborates some of the contemporary social theories surrounding the relationship between code and financial crisis. In a recent issue of the journal Theory Culture & Society focussing on this topic, Marc Lenglet makes the point that algorithmic trading is in itself a crisis-prone activity as far as it affects the temporalities of decision, and crises urgently demand decision.

Another problem with algorithmic trading is that it is designed to replicate trading patterns that were initially centered around human traders, but that by now are increasingly performed by bots. For obvious reasons (algorithms are not patentable so they are to be kept as trade secrets) those bots are black boxes, progressively more difficult to replicate. So an algorithm simulating another algorithm creates some sort of infinite regression. In this financial mise en abyme, misalignments and discrepancies between algorithms are always possible. Reliable measurments of the systemic risk represented by several trading algorithms operating at the same time, on the contrary, become unattainable.

Algorithmic trading marks the departure from the efficient-market hypothesis that had ruled over financial economics in the past decades, according to which prices reflect information on stock market fundamentals. Enter the trading automats, and markets become nothing but Bruegel-esque landscapes of bots imitating each other. Several commentators have voiced their concern and called for regulation, spanning from the introduction of the Tobin Tax to the restriction of automatic trading pace (by posting trades for at least more than a second). Some others have tried to tone down what they perceive as alarmist rhetoric surrounding the progressive replacement of human by artificial traders. See for instance this reassuring British government report stating that there is “no direct evidence that high frequency computer based trading has increased volatility” and that instability is social, meaning that it comes from markets settling in with flash crashes by turning them into “normal” events to which they do not adjust to, until it is too late. One way or the other, projects like ADMVIII might be important as pedagogic devices designed to raise awareness about the growing risk of total economic collapse in a markets where unregulated bots.

More importantly, ADMVIII is useful to help contemporary publics and regulators to confront their own impossibility to envision market fallibility. Even critics of disorganized capitalism (as Lash and Urry would have it) unknowingly trust market resilience and overall reliability. As a society, we are more willing to admit that one day (maybe soon) the earth itself might succumb to an environmental catastrophe, than to acknowledge the actual possibility that our dear old market economy might fall apart and drag us all down screaming with it. There is no need to adopt an apocalyptic stance here, as in fact we are utterly incapable to imagine the apocalypse of our financial system. And yet its fate is sealed, a little everyday. This is a form of false consciousness that art – especially when it’s of the true political kind – might help denounce.

ADMVIII will be displayed at the Gaîté Lyrique from Jan 31 to March 25, 2012 as part of the exhibition “2062”. The bot will be transferred on the Gaîté Lyrique’s server for six months, starting Feb 5, 2012. During this period, the members of RYBN will be working on an open source distribution of the algorithm (tentatively named Antidatamining 9). On Feb 9, you might also want to check this conference at the CNAM (Paris), where the bot will be discussed with economists and mathematicians.