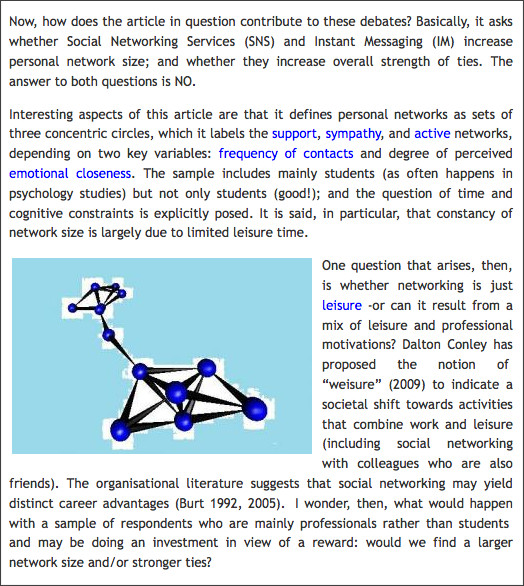 What I would like to add here is just that the article might not be all that interesting, weren’t it authored by Robin “Dunbar’s number” Dunbar himself. You might recall, Dear Reader, that as of recent I have been playing with the hypothesis that one of the actual effects of online social networking might be to enlarge personal networks by providing some kind of cognitive enhancement. That’s why Dunbar’s number (148) has subsequently doubled according to Peter Killworth, and  in 2010 reached the surprising figure of 610 advanced by Matthew Salganik.

In my own private delusion (I don’t know Dunbar personally nor have I met him at scientific symposia), I was positive he would be on the same page. Turns out he’s not that hot about tuning-up his number. Neocortex size, apparently, matters more than any socially constructed electronic interaction environment. At least the results seem to attest just that: that our brain is social up to a point, and that point do not include social enhancements à la Facebook.

These are the kind of results that’ll get the guy a Nobel Prize, eventually. A Nobel Prize in Physiology and Medicine, methinks, mostly because the one in Human-Computer Interaction has yet to be created…